The PluRel Blog was developed and edited by former PluRel PhD Student and project co-ordinator Helge Årsheim. The majority of entries were published in Norwegian, but a handful of entries were also published in English. Please consult the menu in the left column for an overview.

The blog has now been discontinued, but the entries will continue to be displayed on this site.

Om bloggen (in Norwegian) | About

The Politics of Religious Freedom 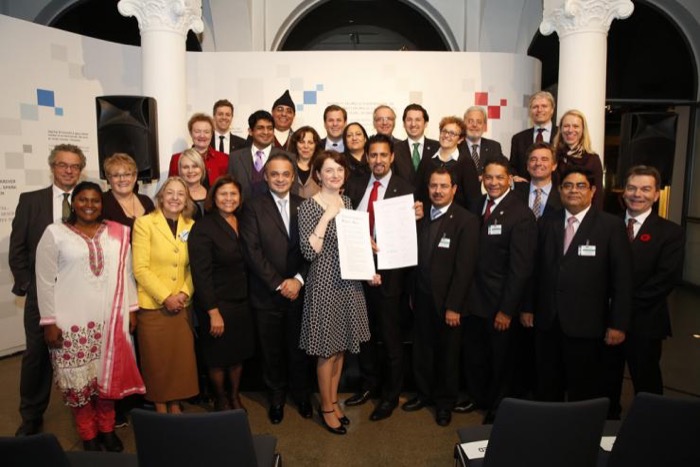 Throughout 2013, the PluRel Blog hosted a lengthy exchange on the (Im)possibility of religious freedom, featuring contributions from Nordic and American scholars on the concepts of religion underpinning 'religious freedom' and the scope of legal measures adopted to offer protection for religion.

In a new exchange, the PluRel blog revisits these issues from a different angle, this time zooming in on international efforts to promote religious freedom on a global scale: Early in November 2014, a group of parliamentarians from countries all over the world met in Oslo to discuss the Freedom of Religion or Belief (FoRB), and sign a Charter reaffirming the principal legal instruments protecting this right. The meeting was organized and hosted by Norwegian Parliamentarian Abid Q. Raja from the Norwegian Liberal Party, in co-operation with parliamentary initiatives for FoRB from the US and UK and the Norwegian NGO Stefanus Alliance International.

In this blog exchange, Associate Professor Elizabeth Shakman Hurd (Northwestern University) offers a critical perspective on the meeting and its conceptualization of both 'religion' and the redeeming potential of FoRB, in particular the way it was expressed in a passage in the promotional materials disseminated before the meeting, where the organizers announced that:

In a very real sense, the gathering of parliamentarians in Oslo is an attempt to counter the dark networks of ISIS, al Qaeda and others focused on religious persecution and violence, with one committed to freedom of thought, religion and belief.

According to Professor Hurd, this line of reasoning '...like missions civilisatrices of the past (...) tend to exacerbate the problems they are designed to resolve'. Her text has previously been published on Religion Dispatches, and has been commented by fellow political scientist Daniel Philpott at The Arc of the Universe.

In a response to Professor Hurd's critique, Head of the Human Rights Section at the Stefanus Alliance International, Ed Brown, gives a more detailed account of the proceedings in Oslo, dismissing the criticism of the meeting through five points that emphasize its global scope, its attention to the interrelationship of FoRB with other rights, and the inclusive, foundational nature of FoRB to the protection of other rights more generally.

In an additional post, Postdoctoral fellow Jolyon Thomas (University of Wisconsin-Madison) expands and connects the ongoing discussion to the universal pretentions of the entire human rights enterprise. Drawing on his research on the US influence on the provisions on religious freedom in the post WW2 Japanese Constitution, Thomas argues that narrowly focused advocacy for religious freedom abroad tends to reinforce the 'good/bad' dichotomy that underpins the concept of 'religion' protected in instruments like the Universal Declaration of Human Rights.

Religious freedom advocacy singles out individuals and groups for legal protection as religious individuals and collectivities. Positing religion as prior to other affiliations re-politicizes and retrenches divisions between religions, and between the religious and the secular. To suggest that legal guarantees for religious freedom, as defined and imposed by the international community, will solve these complex problems and challenges is at best naïve and at worst an insult to the people of region.

While ISIS and its followers may be emboldened, I hope that this initiative will, like other initiatives such as those led by Martin Luther King Jr, Mahatma Gandhi and countless others, embolden individuals around the globe, parliamentarians and farmers, diplomats and factory workers, judges and shop owners to demand their right to freely have, change and practice their faith or worldview. I’m sure that whatever solutions exist will most certainly involve the “people of the region” and will just as certainly involve respect for FoRB. Not as the solution, but as part of the solution

Treating Religious Freedom as a Human Right is a Problem, Not a Solution

The promotion of international religious freedom (IRF hereafter) is premised on the problematic assumption that the activist or policymaker knows religion when she sees it. It does not account for the fact that some practices, dispositions, and groups will escape the activist’s notice, or that she will deem others unimportant or anathema. The simple point I want to make here is that from the earliest moment when it was enforced transnationally as a “human right,” religious freedom was designed to privilege certain religious dispositions and to delegitimize others.