Helge Årsheim's trial lecture and public defence of his Dissertation

On Wednesday, 22nd april 2015, Helge Årsheim held his trial lecture and defended his dissertation "Lost in Translation? Religion-Making at Four UN Human Rights Committees, 1993-2013" at the Faculty of Theology. 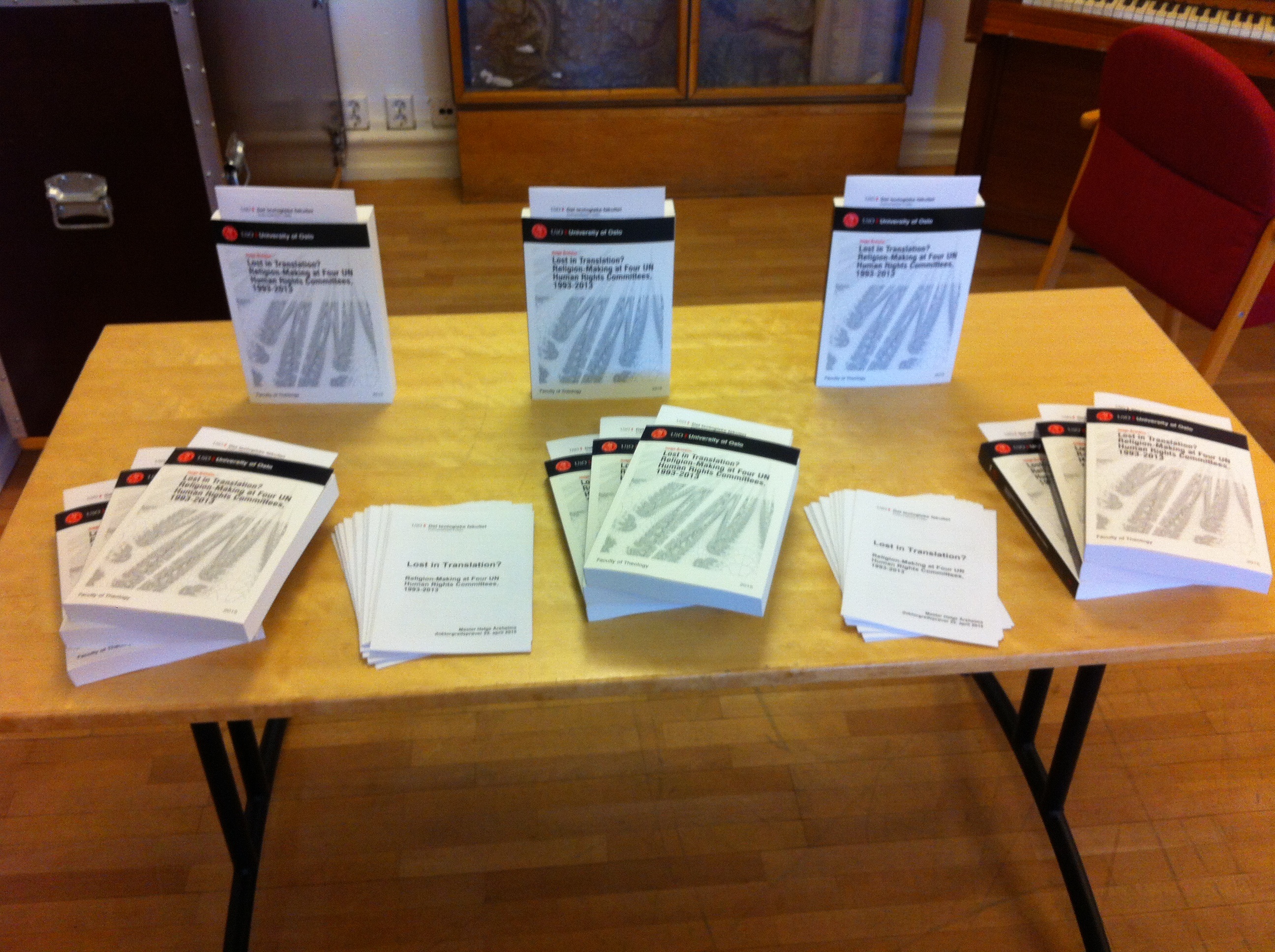 Above, you can listen to Helge Årsheim's trial lecture.

Abstract of the dissertation:

The dissertation engages foundational problems within religious studies, the constitutional order and public debate more generally: where to draw the lines between religions and non-religions, and what models of religion these lines can and should rely on. The dissertation embeds this inquiry within the interdisciplinary field of Law and Religion, with a particular emphasis on the recent popularity of the concept of the ‘post-secular’, identifying a restorative approach that seeks to reintegrate religious voices, traditions and modes of inquiry into the public sphere, and a more critical approach that seeks to unveil and deconstruct the presupposition of the restorative approach; that religion is a universal that exists everywhere. Drawing on insights from the critical approach, the dissertation proposes a research design where the deployment of ‘religion’ in discourse is viewed as instances of ‘religion-making’, whereby different actors propose their version of what religion is, can or ought to be.

In the hands-on analysis, the dissertation relies on religion-making as an analytical tool to examine the approaches of actors within international law to religion in two different respects. In a first, preliminary part, the historical and political trajectory of ‘religion’ in international law is mapped from the early 1900s and up to the present, and tracked in the legal framework, general comments and individual complaints mechanisms of four UN human rights committees: The Human Rights Committee (HRC), the Committee on the Elimination of Racial Discrimination (CERD), the Committee on the Rights of the Child (CRC) and the Committee on the Elimination of Discrimination Against Women (CEDAW). Summarizing the approaches to religion dominating among each committee, the dissertation finds that the HRC favours the individualist approach to religion that has been on the rise in international law since the Second World War; the CERD is more open to the interwar legal conception of religion as a key identity trait of minorities, while the CRC and the CEDAW increasingly engage religious actors in order to gain protection of their different rights categories.

In a second part, these initial findings are examined further as patterns and trends in the religion-making of each of the committees from 1993 to 2013 are explored in great detail across three thematic areas: the recognition and registration of religious organizations; non-discrimination and the recognition of religious minorities; and the impact of religious laws, doctrines and practices on other categories of rights. The dissertation finds that the importance of religion as a factor for the implementation of other rights seems to be increasing, particularly for the CRC and the CEDAW. Furthermore, the committees seem to disagree on the role of religious and customary law, as the CERD recommends increased accommodation of non-state forms of law, while the HRC and the CEDAW in particular are critical of legal systems outside state control. The committees disagree on the role of religious and customary practices, proposing very different analyses on the causes of harmful practices and the proper ways of their abolition. Examining the relation between religious organizations and state power, the HRC has been critical of any entanglement or signs of favouritism, while the CRC has allowed religious favouritism if it can ensure widespread access to basic education.

In conclusion, the dissertation finds that there are fundamental tensions at work in the international regulatory framework on religion, where the balance of power seems to be shifting back and forth between an individualist conception that views religion primarily as belief that can give rise to certain manifestations; a more collectivist understanding that construes religion as a decisive part of identity, and an increasing tendency to recognize religion as a complex social force that is decisive to the protection of other rights.