The Monastic Origins of the Nag Hammadi Codices

Hugo Lundhaug and Lance Jenott offer a sustained argument for the monastic provenance of the Nag Hammadi Codices. 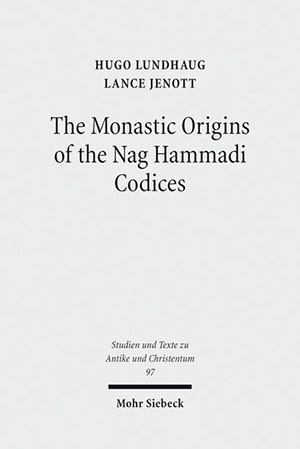 They examine the arguments for and against a monastic Sitz im Leben and defend the view that the Codices were produced and read by Christian monks, most likely Pachomians, in the fourth- and fifth-century monasteries of Upper Egypt. Eschewing the modern classification of the Nag Hammadi texts as “Gnostic,” the authors approach the codices and their ancient owners from the perspective of the diverse monastic culture of late antique Egypt and situate them in the context of the ongoing controversies over extra-canonical literature and the theological legacy of Origen.

Through a combination of sources, including idealized hagiographies, travelogues, monastic rules and exhortations, and the more quotidian details revealed in documentary papyri, manuscript collections, and archaeology, monasticism in the Thebaid is brought to life, and the Nag Hammadi codices situated within it. The cartonnage papyri from the leather covers of the codices, which bear witness to the monastic culture of the region, are closely examined, while scribal and codicological features of the codices are analyzed and compared with contemporary manuscripts from Egypt. Special attention is given to the codices’ scribal notes and colophons which offer direct evidence of their producers and users. The study ultimately reveals the Nag Hammadi Codices as a collection of books completely at home in the monastic manuscript culture of late antique Egypt.