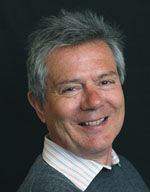 Kjetil Hafstad is Full Professor in Systematic Theology at the University of Oslo since 1985, has been dean for Research and has long experience as leader of large research projects.

My point of departure is two famous ritual acts of protest against suppression, well known in the history of theology, and subsequently investigates how those actors developed in their theology how a person can stand up against evil. Martin Luther threw the bull of ban into fire outside the city gate of Wittenberg December 10th 1520, together with Codex Juris Canonici. By this act he parted officially from what he regarded as the evil empire of the pope. Karl Barth likewise famously refused in 1934 to give an oath of allegiance to Adolf Hitler. He was deposited from his position as Professor at the University of Bonn and had to leave Germany. His resistance was directed against arbitrary decisions from the “Führer”.

Both theologians have worked profoundly on how to resist evil. I will study those deliberations. A special focus will be on Karl Barth’s multifaceted description of evil, especially in Church Dogmatic III/3, where he describes the negative forces in the universe with concepts of “Nichts” (nothing) “das Nichtige” (nothingness with a certain activity), forces that negates and destroys God’s creation.