Sola Scriptura and the Risk of Fossilizing Luther

When we hear the phrase Sola Scriptura we usually don’t adopt the ‘Senecan’ approach and try to stuff our ears with something harder than wax. Maybe we should. The phrase is reminiscent of an uncomfortable reception history, one that we associate with the development of a more fundamentalist Christian interpretative tradition. 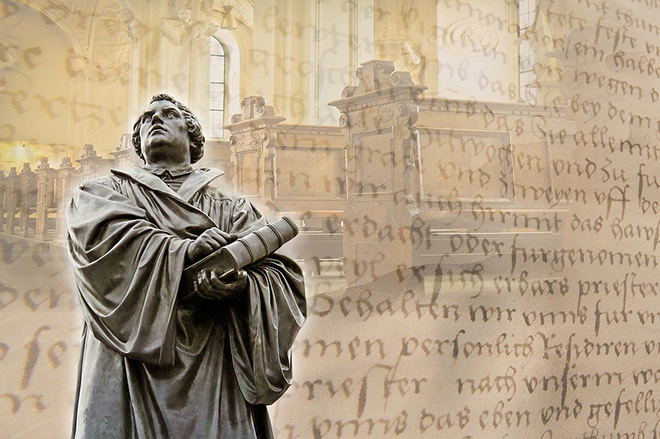 Moreover, can we with upright backs, in this (post-)modern age, really stand for the belief that the Bible interprets itself? Is the Bible a world unto itself, existing in a capsule of sorts, a capsule from which it is possible to draw conclusions about the world outside?

The Bible is not a capsule

From a historical perspective, such a view is problematic. The Bible is not a capsule; it’s a plane – a level playing ground encompassing all of Antiquity, where a constant bartering of religio-cultural and socio-ritual concepts is being carried out by the narrative agents. Even from a linguistic perspective, a text is subservient to the comparative nature of language. Linguistic meaning is derived from the spaces created between the interactions of different dialects, semantics, and linguistic traditions. That is to say, reading a New Testament text in Greek is by necessity to interpret that text through the lens of many other extra-biblical texts, since the meaning of Koine Greek is determined with the help of hundreds of contemporary manuscripts, inscriptions, and papyri from outside the ‘Bible capsule.’

When Luther spoke about Sola Scriptura, he was reacting. He was attempting to solve the problems created by a Papacy that increasingly overlooked the original Biblical source material in favour of what Luther believed to be unrelated doctrines. According to Luther, not only had this practice left the clergy and the average Christian wildly unaware of and distant from the Biblical texts, it also created a situation where doctrines were used in the place of the Bible in order to interpret Christian life and faith. Overall, one could argue that Luther’s reaction was not out of place; in fact, Lutherans claim it was contextually necessary. Whatever we say about Luther’s theology and exegesis, it remains one of his greatest credits that he re-acquainted Europe with the words of the Bible.

Do we risk turning biblical passages into fossilized matter?

However, in his haste to rid the Christian realm of doctrinal domination, did Luther instead, perhaps unintentionally, create the basis for a doctrinal prison that, arguably, has tended to define, shape, and constrain exegesis in the centuries that followed? One step up and two steps back. Because, if the Biblical texts are supposed to interpret themselves, are we not turning them into the equivalent of doctrines? If we exclude extra biblical material from our (theological) exegesis, do we not risk turning biblical passages into fossilized matter, which may be used for personal gain? Can a text which interprets itself do so in more than one way? How can a text interpret itself when we cannot even read it without using the entire contemporary Hebrew and Greek linguistic worlds as a crutch? These are difficult questions, but as we celebrate Luther and his impressive contribution to theology and Christian faith, we also have to ask ourselves if we don’t dishonor his legacy by not seeking a continued problematization of concepts and ideas – Sola Scriptura being among the most influential – that may have run their course. As interpreters of the Bible, let us never stop reacting to theological fossilization; for to always reform is to always react and renew.