Anyone who visits Oslo cannot afford to miss the Vigeland park: the world's largest sculpture park by a single artist. It boasts over 200 sculptures, mainly naked human figures in bronze, granite, and wrought iron. 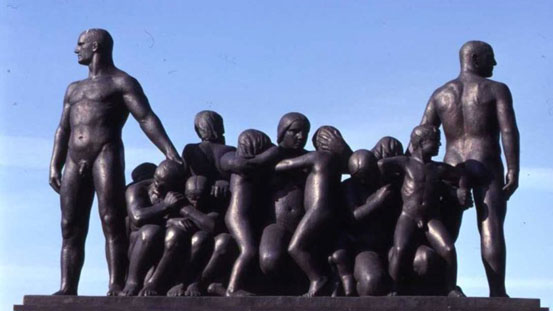 Gustav Vigeland depicted these bodies – men, women and children of various ages – in characteristically powerful and energetic poses: standing, jumping, hugging and lifting each other. Vigeland’s goal, according to one of his biographers, was to represent what people have in common, regardless of race and culture. What we are supposed to see are timeless humans, naked in body and mind.

Our ability to imagine such cultureless human bodies may well be a product of the Reformation. Many scholars consider the emphasis that Protestant reformers placed on internal, personal conviction – as opposed to embodied and institutionalised religion – to be an important factor in our contemporary notion that cultural, ethical and religious truths are private individual preferences. Historian Brad Gregory calls contemporary Western society the ‘Kingdom of whatever’, where anything goes, morally and culturally speaking. For Gregory, many of what he perceives as the failings of today’s society, especially its ‘hyperpluralism’, are the regrettable result of the Reformers demolishing the shared understanding of the common good that existed in medieval times. Gregory’s controversial analysis focuses on the US and fails to account for the fact that many northern European countries that were no less influenced by the Reformation, actually are remarkably homogeneous, both culturally and politically. The popular idea – if not the reality – that none of us are born into a particular way of being, or of seeing the world, but that we are all blank slates who can choose our religious and cultural destinies, and remake our bodies, is a case in point. It might be characteristic of a particular type of Western naiveté that is largely blind to its own origins and preconceptions about issues such as race and ability.

Vigeland’s bodies are of course not cultureless either, even if that is what they intended to be. The Vitalist movement to which his work belongs, and that inspired many artists in Scandinavia and Germany in the late nineteenth and early twentieth century, was characterised by an interest in the force of life, in health, beauty and physical strength. It focussed on athletic men and fertile, motherly women, and thereby not only privileged certain human beings, but also excluded others. It tended to normalize and naturalize what was familiar, and Nordic, and mark as foreign and unnatural anyone else. In spite of Vitalism’s ambivalent relationship to Christianity, it is not difficult to see a Reformation origin in these conceptions of the human body as well. Nazi ideologues drew on Vitalist thinking and were able to directly quote Luther to support their ideas about inferior Jewish bodies.

In many ways, then, a walk through the Vigeland park offers food for thought about how the Reformation has shaped ideas about bodies, both the lifeless and the flesh and blood.