Workshop #2: The Social Effects of Ritual

The second workshop in the REDO Project was held in December 2013 at Granavolden in Norway. The aim of the workshop was to elaborate on the main question in REDO: how may ritual impact societal change? 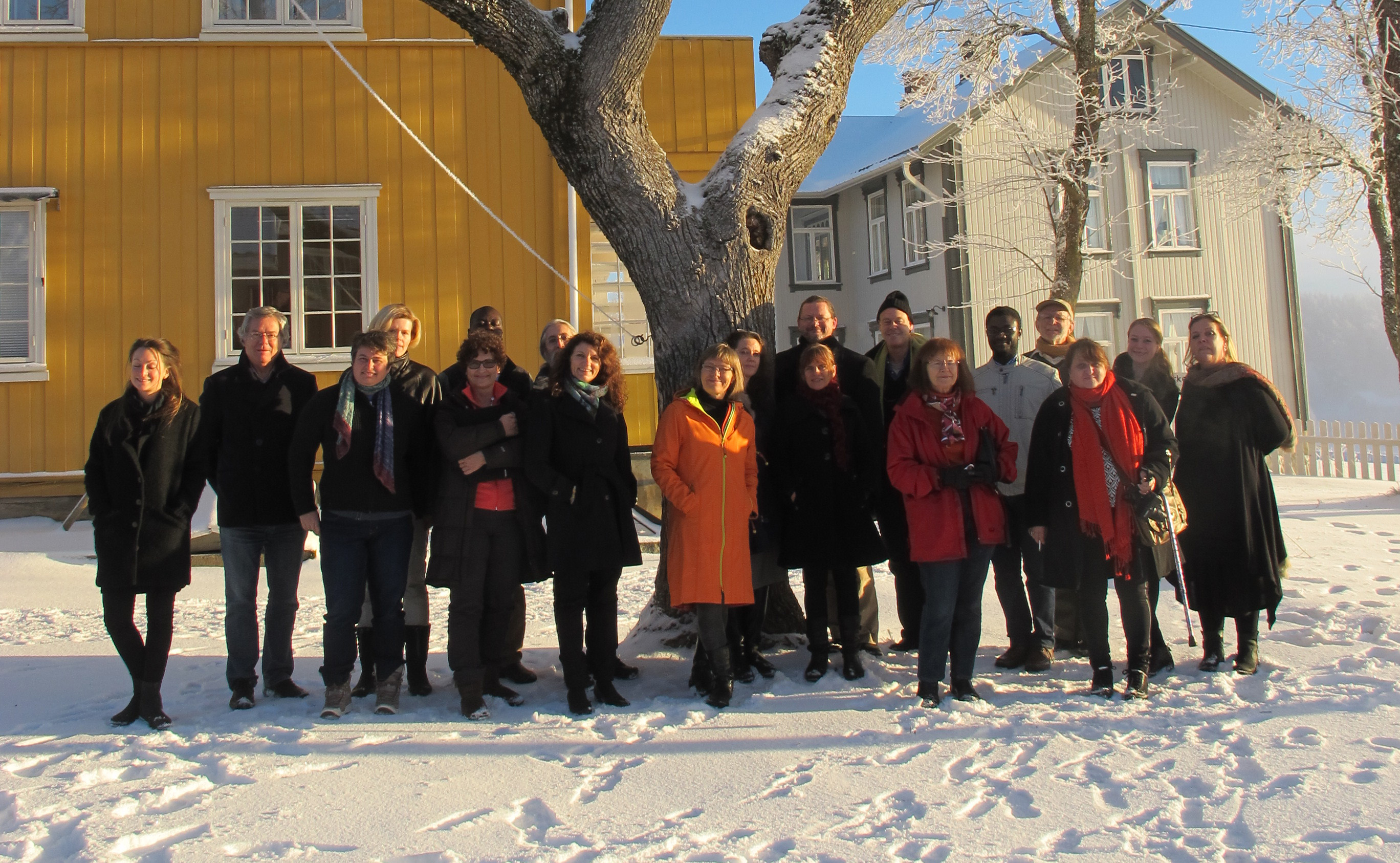 December 9 - 11, the team of REDO researchers gathered in Norway to work on questions surrounding the social effects on ritual. 15 researchers from the REDO project, 3 Phds, and 6 invited guests were attending the workshop.

Topic: The Social Effects of Ritual

In REDO we ask if ritual can influence how societies change, and specifically, whether rituals can enhance democracy. This workshop will focus on how ritual may transform or maintain social relations on various scales. This may relate to how the individual self experiences her or himself in relation to community, or to community-wide perceptions, experiences and material relations. The workshop’s focus is thus less ritual’s constitutive components in themselves than the ways it contributes to social dynamics. This shall help us approach REDO’s main task which is to understand how ritual may impact societal change.

Boundaries are often seen as fundamental to community-making. Anthropology has for long shown how 'the other' is constitutive of social integration. The notion of an inside rests on the experience of an outside and an ‘other’ which one defines oneself in relation to, either as an individual self or as a communal self. Hence, there will always be limits to social integration manifest through the boundary between inside and outside. Inherent to the very notion of social integration is paradoxically social disintegration and exclusion.

Might it be that rituals do not only draw social boundaries, but also define what social boundaries are and therefore, indirectly, what kind of thing "usness" (and social integration) is? What relations are there between ritual process, social change and materiality/space? An additional question is whether this boundary-drawing dynamic is necessarily present: might there be alternative models of community that don't entail such excluded straw men? Or perhaps more relevant to REDO: are there other, radically inclusive forms of ritual action that do not establish or express inside/outside discriminations (or even work against them)?

Program and Outcome of the Workshop

The first day of the workshop started out at the Faculty of Theology, with an open seminar about REDO. Sarah Pike, Morny Joy and Marion Grau held short presentations and received feedback from invited respondents.

After the seminar all the workshop participants travelled to Granavolden Gjestgiveri at Gran, Hadeland.

In the afternoon session the film director Sirin Eide gave a workshop on documentaries.

As many of the REDO researchers are interested in working with film as a method, the workshop was meant to inspire researchers to think from the point of view of a film maker. Eide encouraged an awareness of the power of filmatic tools, such as emotions.

Goals for the day:

1. Graham Harvey: The dynamic interplay between ritual and performance at Riddu Riddu and the Origins festival

Harvey presented ethnographic material from the Riddu Riddu festival in Kåfjord, and the Origins festival in London.

Looking at the different performances of indigenous people invited to Riddu Riddu and Origins, he raised questions about the limits between performance and rituals and between indigeneity and non-indigeneity as permeable. This is what he sees as challenged at these festivals, where people are entertained, but also provoked to face up to indigenous situations, to expand notions of contemporary indigeneity and to find ways of honoring that which indigenous "traditions" encourage respect for, and more.

Harvey received comments from the invited respondent Jan Kjetil Simonsen, Associate Professor of Social Anthropology, NTNU, and initiated an open discussion on questions such as: Who are indigenous? How do the ritual practices in the festivals relate to the notion of "ritual placement in the world"?

Investigating the practice at a festival-like gathering leading up to a protest against fracking, she looks into questions of participatory democracy and inclusion and exclusion. She included Bruno Latour's ideas of “the assembling of the social”, and discussed whether this perspective was useful when looking at environmentalists who engage with nature, and on behalf of nature. Judith Butler's use of Hannah Arendt's concept "Space of appearance" was also relevant in her discussion, as the framing of the events seemed to make a difference. Pike is also analyzing her material with a perspective on life-stories, and she could tell that many of the activists relate to nature as kin, and that memories of encounters with nature in their childhood have been formative.

Benedikte Lindskog, post doc in Social Anthropology at the University of Oslo was invited as a respondent. Her comments regarded the ontological enhancement through the naming of trees etc., questions of community vs. fellowship, thick vs. thin collectivity and the issue of a continual sacrifice. An open discussion raised questions on whether the activist practice is the quintessential rite-de-passage, of the limits between animism and anthropomorphism, violent and non-violent strategies, and more.

3. Jens Kreinath: The Antakya Choir of Civilizations: Interreligious Dynamics, Power Struggle, and the Politics of Inclusion and Exclusion

Kreinath presented the material on the interreligious Choir of Civilizations from Turkey, including its set-up and social dynamics. He observed changes within the composition of the choir based on first accounts of interviews he conducted. Although the choir is considered interreligious, its dynamics of inclusion and exclusion have changed over time, having an impact on the group dynamics. The younger generation of singers is less informed and is more critical toward the political implications Kreinath discussed. Some instances have occurred in which the choir has been subtly used by the Turkish government and administration to advertise the interreligious culture in Antakya. In this respect, the choir has become “politically correct” and, due to that, has lost touch with the interreligious dynamics of Antakya.

The invited respondent was Kjetil Fosshagen from the Department of Social Anthropology at the University of Bergen.

Session 2: Bringing Back the Key Concepts

Jone Salomonsen invited to a discussion of the key concepts in REDO: Democracy and ritual.

Democracy is not a static concept; this is evident if we look to history. In 2014 Norway are celebrating the 200 year anniversary of the constitution, but much has changed. How can we see democracy in relation to nature? Who are the people? In a historical perspective, the "people" could be limited to men owning land, but this has been expanded to include all men and all women. Does that mean we have a real democracy?

Salomonsen introduced the ideas of Carol Pateman as an explanation of why real democracy cannot be. She sees the sharp division between the private and the public sphere as the reason. In the public, laws can ensure democracy; new assemblies can appear - always reaching for democracy. Democracy is, as Marx saw communism, not something that is, but a process - something that is to come. Pateman's argument is that in the private sphere, it is the law of the father that rules, such as religion and tradition - therefore there can be no real democracy.

The conflict is between fundamental institutions, and the boundaries between them are not agreed upon. Neither is the idea of the people, as the current understanding of both the people and democracy is relatively new.

The discussion was centered on Bruno Latour's idea of "the age of the anthropocene", where human powers are destructively taking over the world. The challenge is to create new assemblies (Latour's concept), where nature is given a central role. How is this to happen?

Related to this there was a discussion on July 22, the terrorist attacks in Norway in 2011. What was killed here? Something other-than-human, in addition to the major human losses? Nature? Atmosphere? And what happened after? Was a new people created? How can the people assemble for this to never happen again?

Back to the key concept ritual: What can rituals do? Rituals cannot change the thing, as in the society or the problem. Rather, rituals can change the conditions for society, or the relationship between the conditions.

Goal for the day: To start develop a conceptual framework that all researchers can relate to, and that can help cross-disciplinary dialogue.

This day was devoted to discussions on the framework for the project. With an outset in a model of ritual, both group and plenum discussions asked questions such as: 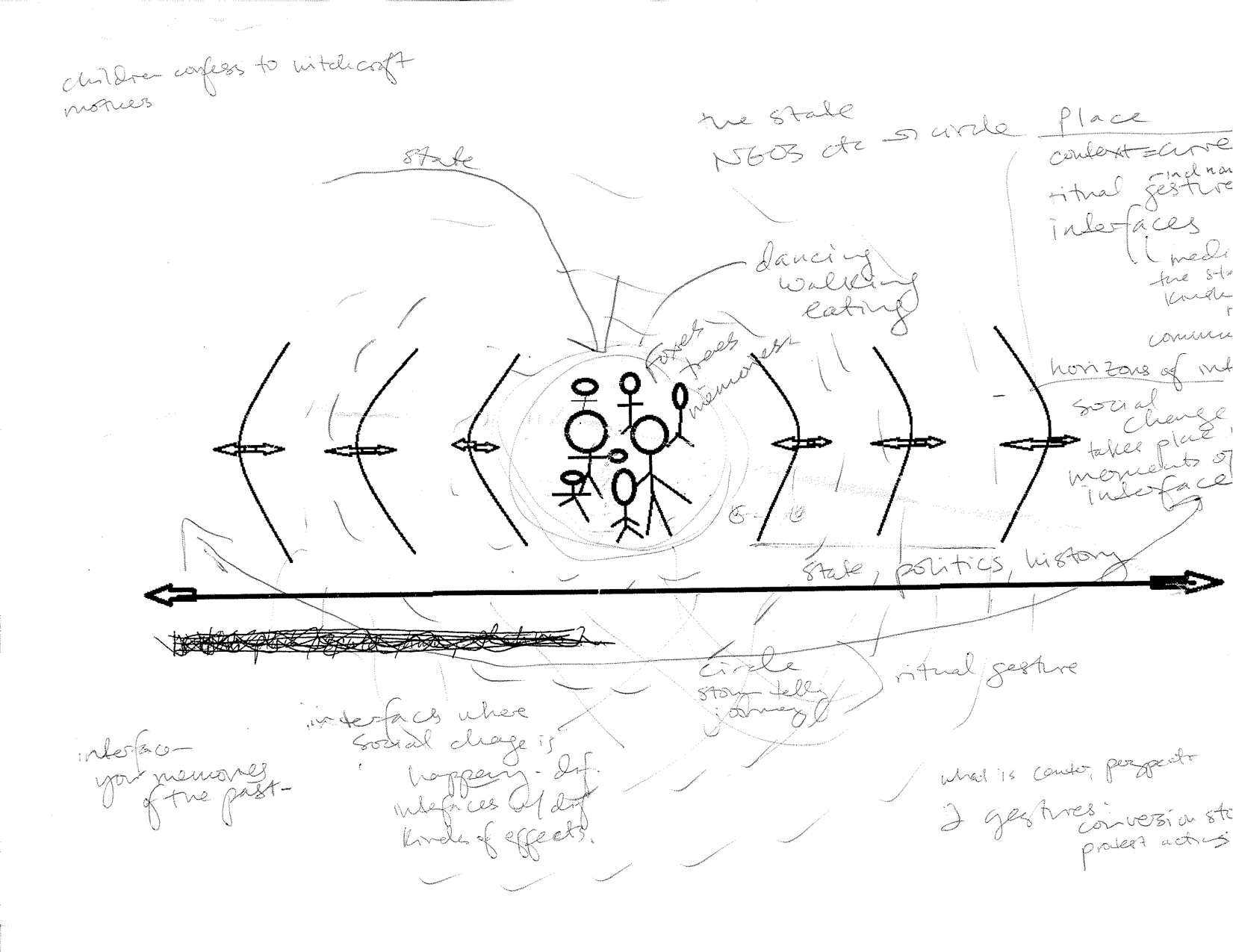 The comprehensive discussions resulted in the contestation of the concepts used, and an elaboration on the suggested model (see photo). The model situates the actors in the ritual, in relation to the interfaces where social change happens. Engaging with ethnography from the different projects through presentations, these were some of the outcomes of a discussion on ritual and social change:

The individual projects were also discussed in the groups, before the day was rounded up with a discussion on practical matters. The REDO project will present 2 panel proposals to the AAR (American Academy of Religion) conference in November, and the next workshop will be held in Paris in 2015 - the topic for the workshop will be "Assemblies".