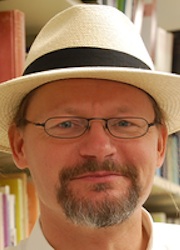 Jens Kreinath is associate professor at Wichita State University, U.S.A. After completing his academic education with degrees in philosophy (BA), religious studies (BA), theology (BA and MA) and social and cultural anthropology (PhD), he teaches in his fields of expertise with a focus on the linguistic anthropology and anthropology of religion.

Over the last years, Dr. Kreinath conducted fieldwork in Istanbul and Hatay studying ritual practices among religious minorities, including Jews, Christians, and Muslims. His most recent research is dedicated to the culture of saint veneration at local interreligious pilgrimage sites in Hatay.

Occupying Soundscapes: The Choir of Civilization and the Impact of Musical Performances on Interreligious Dynamics in Hatay, Turkey

The objective of the research is to study to what extent interreligious musical performances shape the cultural landscape of Hatay as a mosaic of different religions and beliefs unique to Turkey. Although Turkey is a secular, Muslim-majority country, the population in Hatay consists of a number of different religious and ethnic groups such as Sunni Muslims of Turkish and Arabic decent, and Greek Orthodox, Roman Catholic, and Protestant Christians, as well as Jews, Baha’i and various divergent interpretations of Islam, such as the Shia Muslims and Arabic Alawis.

One of the main aims of this research will be to study the dynamics of the Choir of Civilizations, based in Hatay, and how its nomination for the Nobel Peace Prize 2012 impacts and transforms the interaction of the local religious communities as well as the democratization process in that region. The material collected through participant observation and qualitative interviews will provide the basis for a new theoretical approach to the study of the cultures of inter-religiosity and its importance for developing strategies of conflict resolution, as witnessed in neighboring Syria. This research will also enhance anthropological approaches to the study of diverse religious and ritual traditions in Turkey and the Middle East.

May 15 to June 7 2014, Jens Kreinath will stay at the Faculty of Theology as a guest researcher, working on the REDO Project.