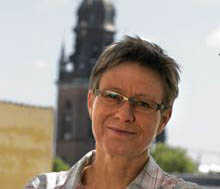 Gitte Buch-Hansen is associate professor at the Department of Biblical Studies, at the Faculty of Theology, University of Copenhagen. During the years 2009-2011, she was employed as associate professor in New Testament Studies at the Faculty of Theology, University of Oslo. She teaches classes in New Testament studies and is often a co-teacher in constructive and pastoral theology at the undergraduate and graduate level and also in post-graduate studies. The intersection between exegesis and pastoral theology has made her interested in the performativity of texts and ritual studies.

Buch-Hansen’s most important work has been on the relation of New Testament texts, in particular John’s Gospel, to Hellenistic philosophy (ethics and cosmology). Besides this, her exegetical orientation includes gender, cultural and post-colonial studies. In addition, she has a special interest in film on which she often gives papers. She is the author of It is the Spirit That Gives Life. A Stoic Understanding of Pneuma in John (BZNW, De Gruyter 2010). Resent essays are “Paulus i Aristoteles’ hønsegård. Dåb og genealogi i Galaterbrevet” in Dansk Teologisk Tidsskrift (forthcoming 2013); “Lars von Triers Melancholia – bibelsk apokalypse eller barokt sørgespil? En diskussion af filmens genre i lyset af Walter Benjamins Ursprung des deutschen Trauerspiel” in Den store fortælling. Festskrift til Geert Hallbäck (2012). ”Norge og Gudsriget. Bibelen i norsk identitetshistorie (set fra en protestantisk nabo - Danmark)” i Norsk Teologisk Tidsskrift. 2011. no. 3. “Lars von Trier’s Antichrist, the Bible – and the Docetic Masculinity.” Relegere (2011).

Buch-Hansen is chairing the Center for the Study of the Reception of the Bible in Art and Culture at the Faculty of Theology, Copenhagen.

Ritualized food and national identity in the Church of Denmark

During the 1980’ties, people began spontaneously to participate in the Eucharist as an integrated part of their worship (Martin 2005, Nielsen 2004). We do not know why it happened. Was it in response to the appearance of new, more visual religious identities in shared public space? Or was it a symptom of the breakdown of modern subjectivity (Asad 1993)? Whatever the reason, the change has had as its effect that the host/bread has become a site, where Christian and national identities are now negotiated.
During a conference on interreligious dialogue 2012, attending Muslims participated in the Eucharist. Their participation launched a high-pitched debate in the Danish majority church about the in/exclusiveness of the ritual, and the ministering priest was reproved. But how is this situation negotiated on the local level?

Two, seemingly, opposing tendencies are seen. On the one hand, the new liturgical awareness is expressed in a reassessment of the tradition; the host with the cross is claimed to be mandatory. On the other hand, we also see small scale experiments within the framework of the ordo. Real bread is used and often it is made by local and ecological products. Seemingly, these different practices reflect a gendered choice. Male priests stick to the symbolic host; female ministers tend to serve a ritualized meal. Yet, we do not know what motivates the different practices. What happens to the ritual when the host is replaced by bread? Is it experienced more inclusive? The study will be carried out as a field work in which the performance of the Eucharist will be observed. The observances will be followed by interviews with the participants and with the minister.