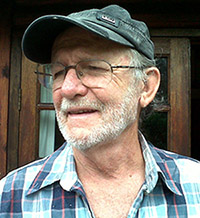 Tony Balcomb is full professor and Senior Research Associate at the School of Religion, Philosophy, and Classics at the University of Kwazulu-Natal, Pietermaritzburg, South Africa.

He is the Southern African coordinator of the African Theological Fellowship and has a special interest in African worldviews and their encounter with the west. He teaches annually at the Akrofi-Christaller Institute in Akropong, Ghana.

The project will be located in the Masvingo area of Southern Zimbabwe and will investigate the rituals and ceremonies conducted by African Traditionalists and African Independent Churches of the Shona tribe in an extensive reforestation programme that started in the early 1990’s.

The theme of the “war of the trees” takes its inspiration from the indigenous notion of chimurenga, or liberation struggle. During the struggle against colonial oppression guidance and inspiration was drawn from the cult of the High God, Mwari, whose oracle was at the Murirani shrine in a cave in the Matopos Mountains. The guerrilla war against the Smith regime in the 1960’s and 70’s used spirit mediums to consult with the Mwari cult to learn about the movement of government forces. Christianity was associated with the colonial oppressors but an indigenous form of the Christian religion, the African Initiated Churches (AIC’s), were also part of the chimurenga. (Daneel, 1998)

In the “war of the trees” the notion of chimurenga, still strong in the imagination of Zimbabwean people, has been appropriated by both African Traditional Religion and the AIC’s.  This time the war is not against a political regime but against environmental degradation. The lost lands had been politically reconquered but ecologically they were being lost all over again. Ecological reform in the communal lands was essential to stem the process of deforestation which was threatening to lay bare three to four percent of the country’s total land surface.

The war of the trees attempts to effect a mass mobilization of peasant communities in reforestation, wildlife conservation, and the protection of water resources. At the heart of the movement is a cosmology that unifies the whole of existence and forms the backdrop of the rituals that undergird the movement. On the side of traditional religion the Mwari cult and the agency of spirit mediums, chiefs and ancestors continue to play a part, as they did in the political struggle, and on the side of Christianity the African Initiated Churches have innovated a number of rituals around the notion of a green eucharist.

Among other things this project will focus on the historical links with the notion of chimurenga, the holistic cosmology that forms the backdrop of the movement, the agency of spirit mediums and ancestors, the special role that women are playing in the movement, the innovative ways in which ritual and theology have been appropriated, the integration of existing old and new traditions, theologies, and ritual practices, and the potential for such a movement to act as a model for other African countries.