Local Dynamics of Globalization In the Pre-Modern Levant 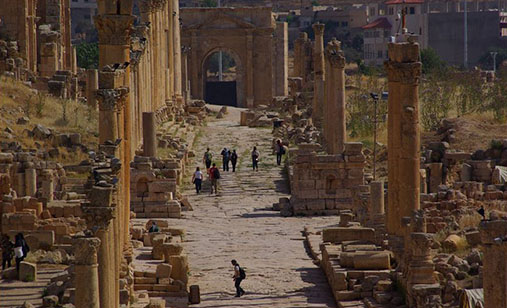 Roman Gerasa (present-day Jerash) in Jordan is one obvious example of globalizing forces, practices, and materialities in the pre-Modern Levant. Photo: Terje Stordalen

Already during the Bronze Age, the Eastern Mediterranean (the Levant) experienced the formation of secondary states and empires that promoted early forms of globalization. This development caught on, with the Persian, Roman, Byzantine, Abbasid and Ottoman empires as good examples.

One often speaks about such empires as agents for cultural development. But, in reality, how profound were the changes they initiated for instance in people’s daily lives? What forces would pull in the direction of local change, and what counter-forces would work in the direction of stability? The aim for the researchers in Local Dynamics of Globalization In the Pre-Modern Levant (LDG) is to explore these and related questions in six different empirical contexts, to let findings in these six contexts elucidate each other, and to formulate theoretical models for studying the local dynamics of globalization in pre-modern societies.

Professor Terje Stordalen, Faculty of Theology, University of Oslo, is the coordinator of the project, with project co-originator Øystein (Sten) LaBianca, Andrews University (archaeology), as the associate coordinator. These two together with Professor Birgit Meyer, Utrecht University (social anthropology), are responsible for developing the theoretical aspects of the project.

For more information about the research project Local Dynamics of Globalization In the Pre-Modern Levant see Professor Terje Stordalens homepage and The Centre for Advanced Study (CAS).