Jakob Borgen is a student of the Religious Roots of Europe MA programme. In this travel diary he shares his experiences from a fieldtrip in Israel. "I am standing in a field in northern Galilee watching the sun rise. 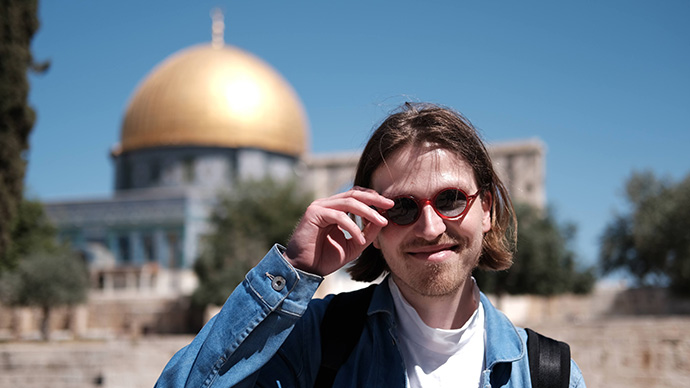 Jakob Borgen with the Dome of the Rock in Jerusalem in the background. Photo: Joel Bornau

It is 5:30 am and we are ready for our first day at the dig-site. In the distance I hear a man (that I will later know is called Abed) who is yelling, “Yallah!”, he is urging the workers on. It is time to get the tents ready. Indeed, when the sun inevitably stands above us, we will need some shade. I have brought as much water as my backpack allows for. 3 litres to be exact. The next day I am bringing 4 litres.

Space, Art and Identity in Synagogue, Church and Mosque

The reason I am here is a course called: “Space, Art and Identity in Synagogue, Church and Mosque.” (TFF4003) It is an elective course at the University of Oslo, Lund and Copenhagen. We will also be accompanied by a group of students from the Harvard Divinity School. The overarching questions we were grappling with were: What is a space? What is a holy space? How were these spaces used and by whom? Prior to our arrival we have through both seminars and our readings meticulously investigated what sources the historian relies on when attempting to answer questions such as these. In a rather crude manner, we may distinguish between two forms of obtaining information about the past: the study of literary sources, so-called “eye-witness” accounts, and the physical evidence one may find in the soil, sometimes called “arguments in stone”. These various sources may inform one another, making the picture we are attempting to create more complete. At least that is the hope.

The site which we are excavating is in eastern Galilee and is by some known as Horvat Asaad. Evidence found suggests that it is an agricultural farmstead from the Hellenistic Hasmonean period, about 2100 years old. Very old indeed. For the dig we have been divided into groups of 3 to 4 people. Each having a unit, a square that is a part of a grid. In a sense, we have created a small community. Each square has a purpose. The dirt in the square I am working in is tough and ancient. We are trying to locate what we suspect is a wall. When we do encounter the occasional object that
has been hidden in the soil for thousands of years I must admit, that it feels special. In a sense the object is letting us know that there is an actual past, where people did indeed live their lives. I pick up a potsherd, and imagine someone drinking out of the cup it belonged to.

Abed is in a paradoxical hurriedly and relaxed manner moving around at the site offering coffee and mint tea to everyone. I put down the shovel and return to the present day for a moment. Dissecting the past is a curious endeavour. To investigate the process of history means in one sense to engage with that which is gone: It has happened but is no more. Seemingly then, one of the goals of the historian becomes to make the past appear.

Back at a roof top terrace in Tiberias, our home for our time in Galilee, we were having a seminar wherein we discussed an analogy related to the study of the past. The idea is that when we describe the historical process from the perspective of today, we are in a sense creating a zombie. What the historian is attempting is to bring to life something that can be considered “dead”. Thus when we study history, we cannot help to change it ever so slightly. If we do recognise the past as a zombie-like creature, we may suggest that the zombies we have created can bring about other zombies. We encounter interpretations of interpretations: Other
historians have created zombies out of zombies prior to our endeavour. The key becomes therefore to be aware of our role and biases. Is it at all possible to understand a society so distant from the one we are a part of today? Maybe. Our weeks in the holy land have so far been very fruitful in contextualising the study of my MA: The Religious Roots of Europe. Visiting various historical synagogues, mosques, churches and temples have made history more vivid. In seeing these ancient spaces, the past felt closer than ever…

Our time in Galilee is now over. We are relocating to Jerusalem. A city considered sacred by many religions. In Jerusalem we encounter an abundance of identities, groups and lifestyles. We are suddenly constantly surrounded by buildings, rocks and objects that echo the holy characteristics which we have attempted to understand. What is holy? We seem to return to this question, but it is hard to pin it down. I do get the sense that it is all around us now that I see the devotion, prayer, and eyes of the people we pass in the old city. We have moved into the Swedish Theological Institute in Jerusalem. A profoundly beautiful and historical building. There is a cat walking around in the garden and we will soon have dinner together as a group. We now discuss the conflict existing in the areas around us. It has been present during our trip, but we have been focusing on the conflicts and memories of the past, rather than the one which is happening today: Israel and Palestine. Being here makes it very evident that words contain a specific meaning. The words we use have become politicised. Perhaps this was always the case.

Most of the ancient sites we visited in Galilee were first and foremost spaces of the past. Objects and buildings to be studied from a distance. In Jerusalem people still use these spaces for religious purposes. They are not merely objects or buildings, but are instead an inherent aspect of the lives of so many people. Here religion is lived. Today, I am writing this from Georg Sverdrups hus, a library in Oslo at ‘Blindern’. I am in a sense already engaging with a past. The words I write on this digital paper are my memories. They are my accounts as an eye witness. When we study historical literary
sources we often discuss and make a note of that which has been omitted. How  something that has not been articulated can be considered meaningful. I wonder what I have omitted.