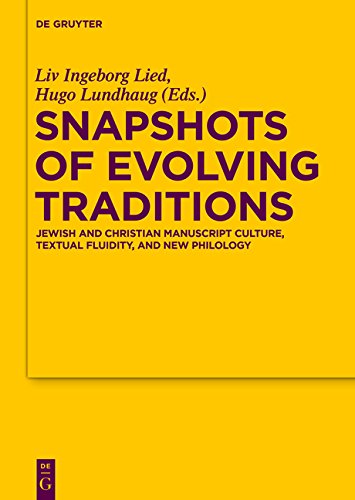 Scholars of early Christian and Jewish literature have for many years focused on interpreting texts in their hypothetical original forms and contexts, while largely overlooking important aspects of the surviving manuscript evidence and the culture that produced it. This volume of essays seeks to remedy this situation by focusing on the material aspects of the manuscripts themselves and the fluidity of textual transmission in a manuscript culture. With an emphasis on method and looking at texts as they have been used and transmitted in manuscripts, this book discusses how we may deal with textual evidence that can often be described as mere snapshots of fluid textual traditions that have been intentionally adapted to fit ever-shifting contexts. The emphasis of the book is on the contexts and interests of users and producers of texts as they appear in our surviving manuscripts, rather than on original authors and their intentions, and the essays provide both important correctives to former textual interpretations, as well as new insights into the societies and individuals that copied and read the texts in the manuscripts that have actually been preserved to us.

Hugo Lundhaug & Liv Ingeborg Lied, "Studying Snapshots: On Manuscript Culture, Textual Fluidity, and New Philology."
Hugo Lundhaug, "An Illusion of Textual Stability: Textual Fluidity, New Philology, and the Nag Hammadi Codices."
Lance Jenott, "Reading Variants in James and the Apocalypse of James: A Perspective from New Philology."
René Falkenberg, "The Making of a Secret Book of John: Nag Hammadi Codex III in Light of New Philology."
Katrine Brix, "Two Witnesses, One Valentinian Gospel? The Gospel of Truth in Nag Hammadi Codices I and XII."
Lillian I. Larsen, "Monastic Paideia and Textual Fluidity in the Classroom."
Samuel Rubenson, "Textual Fluidity in Early Monasticism: Sayings, Sermons and Stories."
J. Gregory Given, "Four Texts from Nag Hammadi amid the Textual and Generic Fluidity of the 'Letter' in the Literature of Late Antique Egypt."
Michael Philip Penn, "Know Thy Enemy: The Materialization of Orthodoxy in Syriac Manuscripts."
Jeff Childers, "'You Have Found What You Seek': The Form and Function of a Sixth-Century Divinatory Bible in Syriac."
Liv Ingeborg Lied, "Between 'Text Witness' and 'Text on the Page': Trajectories in the History of Editing the Epistle of Baruch."
Eva Mroczek, "The End of the Psalms in the Dead Sea Scrolls, Greek Codices, and Syriac Manuscripts."
James R. Davila, "Translating the Hekhalot Literature: Insights from New Philology."