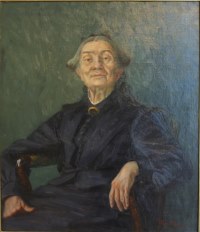 Hansteen was an early feminist lay theologian, painter and writer and a pioneer in the women’s suffrage movement in Norway. The daughter of Christoffer Hansteen, a prominent professor of astronomy and geophysics at the University of Oslo, Aasta Hansteen received her art education in Copenhagen and Düsseldorf. In 1850 she exhibited her works at the World’s Fair in Paris, and in 1862 she was the first woman to have a book published in “nynorsk” about Norwegian dialects and customs, Skrift og Umskrift i Landsmaalet. In 1878 she wrote Woman Created in the Image of God, based on her own self-arranged public lectures in the years 1876-78 in Oslo, Trondheim and Copenhagen. In this and future publications she fiercely opposed traditional theological views of women and critiqued Biblical authors for having denigrated women both spiritually and humanly by regarding her a second class person in rank and quality.

Hansteen’s self-appointed hermeneutical task was to reread crucial parts of the canon, sort out “rubbish” from its hidden “gold”, and promote women as equal in status to men by virtue of nature and God’s “true design”. Her arguments were in particular inspired by the works of the early American feminist Elizabeth Cady Stanton and The Woman’s Bible project, and by John Stuart Mill’s influential Subjection of Women. Her overriding concern was female autonomy and female spirituality in confluence with defining and promoting a new moral/social order.

Aasta Hansteen was a “first wave” feminist, and part of a long tradition of women’s rights movements in Norway. As a result, Norway was in 1913 the first sovereign state in the world to grant women full parliamentary rights. The priestly office of the Church of Norway, however, did not formally include women until 1938. The University of Oslo had in 1899 accepted Valborg Lerche for a full theological degree (cand. theol.). Yet the first female Lutheran priest, Ingrid Bjerkås, was not ordained until 1961. Discrimination, however, is not a thing of the past but continues to take on new discursive forms and subtle shapes. New knowledge, rigorous analysis and imaginative and relevant intellectual and theological reflection are still needed. The Annual Aasta Hansteen Lecture on Gender and Religion is a contribution to help enhance competence and performance in this particular field.