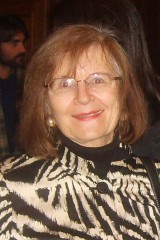 Morny Joy is University Professor in the Dept. of Religious Studies at the University of Calgary, Canada.

Her research has been published in the areas of philosophy and religion, postcolonialism, and intercultural studies in South and South-East Asia, as well as in diverse aspects of women and religion. Morny is on the Executive Committee of the International Association for the Study of Religion, and General Editor of their book series. She is also on the Editorial Board of a number of journals.

Her recent publications include:

My contribution to this project will be to formulate the foundations for new insights in both philosophy of religion and theology that take into account shifts occurring in contemporary movements at the popular level of rituals and behaviour, and in more reflective forms of cultural productions. Such movements are occurring not only in ecologically concerned activities but also in diverse developments that mark a radical change in what could be called the Western imaginary.

To help me articulate this profound change, I will appeal to the work of eco-theologians, such as Catherine Keller (2002; 2007); Grace Jantzen (1998; 2009) and other philosophers and theologians such as Celia Deane Drummond (2002), who affirm existence in this world, rather than a preoccupation with life after death. Such philosophies and theologies are also concerned with matters of embodiment and gender and moving beyond dualisms, such as mind/body.

In my own work I am working towards building a philosophy and theology of transformation and renewal. This presupposes a re-enchantment of the world, and also envisions harmony within diversity – both supporting a vital concern for justice. I propose to examine all these characteristics, all very evident in the various elements of this present project. My aim is to provide a philosophy of religion and theology that both informs and will be informed by findings obtained from this innovative research project.