Lloyd G. Abercrombie meets experts on Coptic literature in Europe and the USA

"Being able to spend quality time with experts in your field makes a great difference", says Lloyd Abercrombie. He used the ATTR mobility grant to deepen his understanding of Coptic manuscript culture in dialogue with experts within the field. This was done during several shorter research stays at different locations.

Be inspired by his report and apply for an ATTR mobility grant. 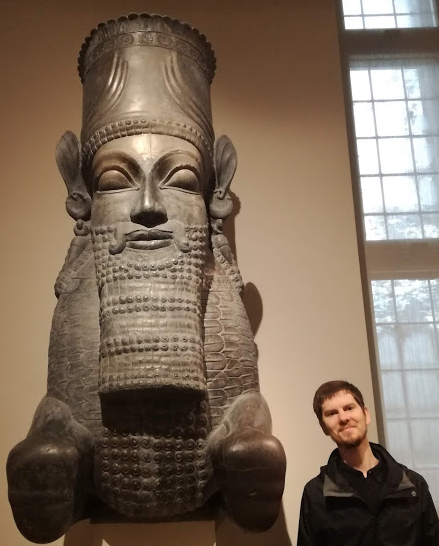 Lloyd G. Abercrombie is writing a thesis titled The Edfu Manuscripts: A New-Philological Examination of a Coptic Manuscript Collection from Islamic Egypt. The ATTR mobility grant enabled him to be a guest at the Digital Edition of the Coptic (Sahidic) Old Testament project at the Göttingen Academy of Sciences and Humanities for two months, and attend the Summer School in Coptic Literature and Manuscript Production in Hamburg. In addition, Abercrombie stayed at the Lutheran School of Theology in Chicago, and the University of Chicago, Illinois, for a month and a half. Here is what he had to say about his research stays.

Deepening my understanding of Coptic manuscripts and manuscript culture­

With the ATTR Mobility Grant, I was first able to spend two months in Göttingen, Germany where I was a guest of the Digital Edition of the Coptic (Sahidic) Old Testament project. My own project is devoted to a corpus of one-thousand-year old, mostly Coptic manuscripts from southern Egypt.

While in Göttingen, I was able to sit down with a number of scholars knowledgeable about such areas as: general Coptic literature, Coptic scribal and manuscript culture, and Coptic liturgics; scholars

such as (in alphabetical order) Dr. Diliana Atanassova, Prof. Dr. Heike Behlmer, Prof. Dr. Frank Feder, Dr. Chrysi Kotsifou, and Dr. Alin Suciu. These individuals helped me better understand the manuscripts I am studying by, for example, looking at the photos of them and discussing what is and is not unusual in comparison with other Coptic manuscripts. I was also able to have more informal conversations about many aspects of Coptic studies with these individuals, and other junior and senior scholars involved in the project there.

During this time, I also attended the Summer School in Coptic Literature and Manuscript Production in Hamburg where we learned about such things as the composition and analysis of inks, the use of different writing materials, Coptic literary genres, Coptic linguistics, etc. from such mavens of the field as Profs. Drs. Heike Behlmer, Paola Buzi, Frank Feder, Tito Orlandi, Sebastian Richter, and Alin Suciu. In both Göttingen and Hamburg, I was able to present my project and get valuable feedback.

After our two months in Göttingen, my wife and I traveled to Chicago where we enjoyed the hospitality of the Lutheran School of Theology. In Chicago I had the opportunity to meet weekly with Prof. Dr. Mark Swanson, an expert on medieval Egypt and medieval Muslim-Christian relations. Swanson and I went over hypotheses concerning how this collection of manuscripts came together. During this time, I was able to benefit from Swanson’s extensive knowledge of medieval Egypt and his previous work on monastic Libraries.

The Lutheran School of Theology is literally across the street from the University of Chicago campus and this allowed wonderful access to UChicago’s immense library collection and the awe-inspiring collection of antiquities in the Oriental Institute. At UChicago I was graciously allowed to sit in on Prof. Dr. Sofía Tovar Toralla’s class on Coptic language and literature. I was grateful for the opportunity to meet Prof. Torolla, another Copticological expert, and her students. Her class allowed me to refresh my own knowledge and witness the classroom teaching style of an experienced educator in the Field.

While in Chicago I was able to travel to Ann Arbor, MI, home of the University of Michigan, which is said to contain the largest ancient collection in North America. There I met up with Drs. Feder and Suciu from Göttingen who had curated an exhibition of Coptic manuscript in the UMichigan collection. Drs. Feder and Suciu also invited me to spend some time with them "behind the scenes" where I was able to observe the analysis and cataloguing of manuscripts firsthand.

The benefits of proximity

I was previously acquainted with some of the scholars I worked with in Germany and the US, but many I met for the first time, having only been familiar with them through their work. Even with those I already knew, I was able to deepen my relationships. Spending quality time with experts in your field makes a great difference, not only in the speed with which you can learn and solve problems, but also as concerns motivation.