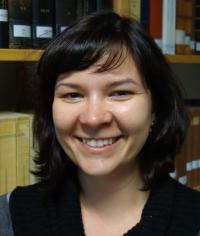 My PhD thesis will focus on the Coptic Christian manuscripts produced in Touton in the Fayum between the ninth and tenth centuries CE. The aim of this thesis is to learn more about Coptic book production at the time of the decline of the Coptic language and during the increasing influence of Islam.

The methodology starts with collecting manuscripts with preserved scribal notes (colophons), which explicitly mention Touton, and systematically describing their visual features (such as illumination or palaeography) in order to identify further manuscripts. Apart from the analysis of codicological and prosopographical data, I will investigate the contents, looking for patterns that might have existed in both monasteries where the Touton texts were discovered.

By studying the manuscripts in their entirety with the aid of numerous Digital Humanities tools and through an interdisciplinary dialogue I aim to achieve a comprehensive account of the Fayum as a medieval Coptic book production centre.