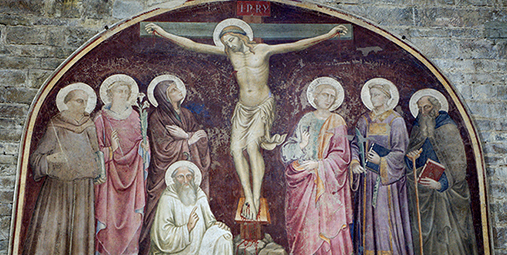 I found out my story was basically a summary of what the Gospel of Matthew teaches, while each of the other three gospels in the New Testament, Mark, Luke, and John, each tell their own unique version. Whereas Matthew says that the resurrected Christ made one grand appearance to his disciples in Galilee (in northern Israel, far away from Jerusalem), and sent them out to preach to the world, Luke says that he appeared to different followers at different times, and not at all in Galilee, but in and around Jerusalem itself. Luke also disagrees with Matthew that Jesus sent out his disciples to spread the gospel right away. Instead, he says Jesus told them to stay in Jerusalem and wait to receive the power of the Holy Spirit. In distinction to both Matthew and Luke, the Gospel of John says that Jesus appeared first to Mary Magdalene, and only then to his male disciples behind closed doors.

Perhaps the most puzzling story of the resurrection is, however, found in the Gospel of Mark. For here, the resurrected Jesus actually never meets his disciples at all! At least that’s how we find the story told in one version of Mark. The problem arises from the fact that Mark’s Gospel actually ends in strikingly different ways from one ancient manuscript to the next.

Although there are at least six different endings of Mark preserved in various manuscripts, we can simplify them into two versions, a longer ending and shorter ending. Both endings agree on what happened up to a certain point: on the third day after Jesus’ crucifixion, some of his women disciples go to the tomb to anoint his body (note that they didn’t actually think he would rise) and are shocked to learn that he isn’t there. Instead, they find a strange young man who tells them to tell Peter and the other disciples that Jesus has risen and gone north to Galilee where he will meet them in person. So far so good. But this is where the difference between the longer and shorter endings really takes off.

The shorter ending of Mark simply concludes by saying that despite the young man’s instructions, the women ran away “and said nothing to any one, for they were afraid.” End of story. The women never report back to Peter and the others; the disciples never go north to Galilee; they never encounter the risen Jesus; and they are never sent out to evangelize the world. Not much of a story to base a world religion on, is it?

The longer ending of Mark reads a little more like the other gospels, as one might expect. Jesus appears first to Mary Magdalene, as in John, and then to various other disciples at different times, as in Luke. According to the longer ending, although the women flee from the tomb at first, they do eventually report back to Peter and the others as the young man instructed them. The disciples then meet the risen Jesus and receive the great commission to preach the gospel to the world, as in Matthew. Many readers from ancient times to today undoubtedly saw this version of the story as a much happier ending.

How can we explain these radically different conclusions to Mark’s Gospel? Biblical scholars continue to debate which ending is most likely the original. Some believe the longer ending is the original, and that for some reason it was removed from some of the ancient manuscripts, maybe even by accident. Others believe the shorter version is the original, and that later Christians added the longer version to bring Mark into greater conformity with the stories told in Matthew, Luke and John. Others propose that we may no longer possess Mark’s original conclusion at all, and that all the manuscripts have been edited over the centuries, while still others suggest that multiple editions could have been published by the same evangelist.

I would like to think that the shorter ending of Mark – where the women flee from the tomb in fear and never tell the other disciples about Jesus’ resurrection – is in fact the original version of the story, despite the fact that it seems so bizarre and tragic. It is in fact the utter tragedy that makes me believe it, because it supports so well what I think is one of Mark’s central messages: that the Messiah did not come in glory or power, but in suffering and humiliation. Contrary to what many people in Jesus’ time expected, Mark believed that Jesus was the Messiah because of his suffering, as foretold by the prophet Isaiah. In Mark’s view, the Messiah did not come in power to rid the world of injustice and tyranny through military might or even political activism, but rather through his sacrificial death on the cross, which brought forgiveness and unity between God and humanity.

And what could be more humiliating than being completely abandoned by everyone closest to you? That is what Mark’s strange ending may be trying to tell us. In the end, Jesus was completely abandoned by all his followers. At his arrest, they flee. At his trial, his most loyal disciple denies him three times. As he hangs from the cross, he is mocked by common criminals. Only a few of the women remained loyal and visit his tomb. Yet in the end, even they flee in fear and tell no about his resurrection. His disciples never find out what happened and they never go to meet him. The shorter conclusion of Mark leaves us with the impression that in the end, Jesus didn’t have any followers left. They all ran away afraid. Could there be a more fitting conclusion to a story about a messiah who, in Mark’s view, was truly God’s suffering servant?

So Mark asks his readers to think about two important points – the true Messiah came in suffering, not power, which no one expected or could understand, not even his closest disciples. And in the end, it is the readers of Mark’s Gospel who are Jesus’ real disciples, not Peter and the others who abandoned him. This is a powerful story. Although Mark’s conclusion was expanded by later Christians to bring it into conformity with the other Gospels, its own unique message is still worth thinking about today.

By Lance Jenott
E-mail this page