Many people express their spirituality and faith through art. This also applies to hip hop and graffiti. Five dead hip hop artists, based on the Mount Rushmore monument. From the left: 2Pac, Jam Master Jay, Big L, Notorious BIG and Big Pun. The wall was painted by the Ymi Crew.

In his doctoral thesis, he has studied religious trends in hip hop, using graffiti and rap songs from New York as his starting point.

Hip hop is a cultural movement that developed among young people in marginalised areas of New York at the start of the 1970s. The core elements of hip hop are graffiti, breakdancing, DJing and rapping. Today, hip hop is a global youth culture, found in different forms around the world.

‘Many people express their spirituality and faith through art, and I believe many find expressions in hip hop that are closer to life than what you find in traditional theological and church-related contexts,’ says Opsahl. 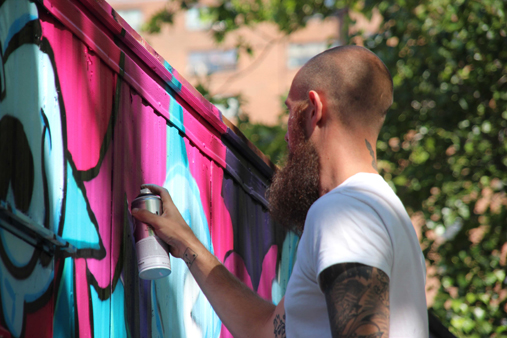 Lust for life and hope

Opsahl points to a possible spirituality that is characteristic of hip hop, a hybrid spirituality formed in the fight against oppressing structures.

‘I have found expressions of a deep spirituality rooted in life experience, often formed by difficult circumstances affected by poverty, systemic racism and sexism; a survivor spirituality that generates a lust for life and hope despite destructive surroundings.’

In his thesis, Opsahl looks at songs by artists such as 2Pac, Lauryn Hill, Public Enemy, Wu-Tang Clan, Erykah Baduh and Mos Def.

In an interview with Jubel.fm, Opsahl mentions Lauryn Hill as his spiritual favourite:

‘Lauryn Hill was the one who opened my eyes to hip hop culture, with a musical style that built my own tradition as a jazz musician.’

‘She is a good example of spirituality in hip hop culture, as her lyrics are so rich in references to Bible stories as well as the Rastafari culture, while she also has a highly personal style,’ he says.

Graffiti as an art form

Graffiti is an important element of hip hop and an art form that perhaps has not received the recognition it deserves.

In his thesis, Opsahl looks more closely at graffiti by artists such as Tracy 168, James Top, Tats Cru, Too Fly, Muck, Queen Andrea and Dez.

‘In many ways, graffiti can serve as the stained-glass windows of our time,’ says Opsahl.
‘In the past, when bibles were expensive and most people could not read, Bible stories were retold through stained-glass windows. In the same way, many graffiti artists retell stories, communicate political messages and create visual representations of cultural heritage, especially in relation to cultural minorities.’
Opsahl continues:
‘Graffiti is a transient art form; a piece can be there for a day, a week or a few years, but it will eventually disappear. At the same time, graffiti is one of the most exciting and interesting art movements of our time.’

From the Graffiti Hall of Fame in Harlem, New York. The pink angel is taken from a wall that honours female graffiti pioneers, made by some of today’s foremost female artists: TOO FLY, QUEEN ANDREA, FEVER, DIVA, MUCK, DONA and INDIE. The angel was made by TOO FLY. (Photo: Carl Petter Opsahl) 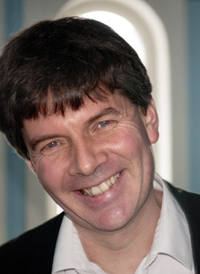 Carl Petter Opsahl defended his doctoral thesis earlier this year on the topic ‘Dance To My Ministry: Exploring Hip-hop Spirituality’ (pdf) at the Faculty of Theology at the University of Oslo.

Course about spiritual hip hop at the Faculty of Theology