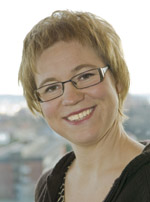 Marianne Bjelland Kartzow is Professor of New Testament Studies at the Faculty of Theology, University of Oslo, a position she has held since 2013.

Kartzow received her Ph.D. in 2007 (thesis entitled Gossip and Gender: Othering of Speech in the Pastoral Epistles, published by DeGruyter 2009).

From 2008-2011 she co-chaired with Halvor Moxnes the research project “Jesus in Cultural Complexity,” funded by the Research Council of Norway (RNC).

In 2011-2013 she lived in Berlin, Germany, where she served as a minister in the Norwegian Church. She continued her academic work as a Research Fellow at the University of South Africa (UNISA, 2011-2014), and by participating at the New Testament Symposium at Humboldt University in Berlin.

Professor Kartzow’s second monograph, Destabilizing the Margins: An Intersectional Approach to Early Christian Memory (published by Wipf and Stock) was published in 2012.

Kartzow is chair of the research Group “New Testament and Early Christian Studies,” recently evaluated with top score (5/5) within the field of Religion and Theology in the recent Evaluation of the Humanities in Norway (HUMEVAL) by RCN (report on Religion and Theology pdf). She is, in cooperation with Professor Hugo Lundhaug and Anders Runesson, chair of the newly established lecture series “The Oslo lectures in New Testament and early Christian Studies” at the University of Oslo.

In addition to her three single-authored books, professor Kartzow has also published a series of research articles and book chapters, and co-edited eight published anthologies and special issue of research journals. She is currently member of the editorial board of three research journals. In 2015 she was part of the project group who successfully applied for and established the interdisciplinary RCN Research School ATTR (Authoritative texts and Their Reception).

Kartzow participates in several national, Nordic and international networks and projects, in particular Society of Biblical Studies, where she has chaired four Program Units, and served at several boards. From 2017 she is a member of The SBL Status of Women in the Profession Committee (CSWP)

Kartzow has supervised a number of master and PhD students, and been a member Ph.D. expert committees (Norway, SA, Finland). She is a manuscript reviewer for several international publishers and journals and been a member of prize award committees. She has organized several international workshops and conferences, and been invited as guest lecturer and keynote speaker at several Nordic, European and South African Universities.