Professor Catherine Cornille received her honorary doctorate degree from the Faculty of Theology on September 2. Cornille is one of the world’s leading researchers in the field of comparative theology and interreligious dialogue. 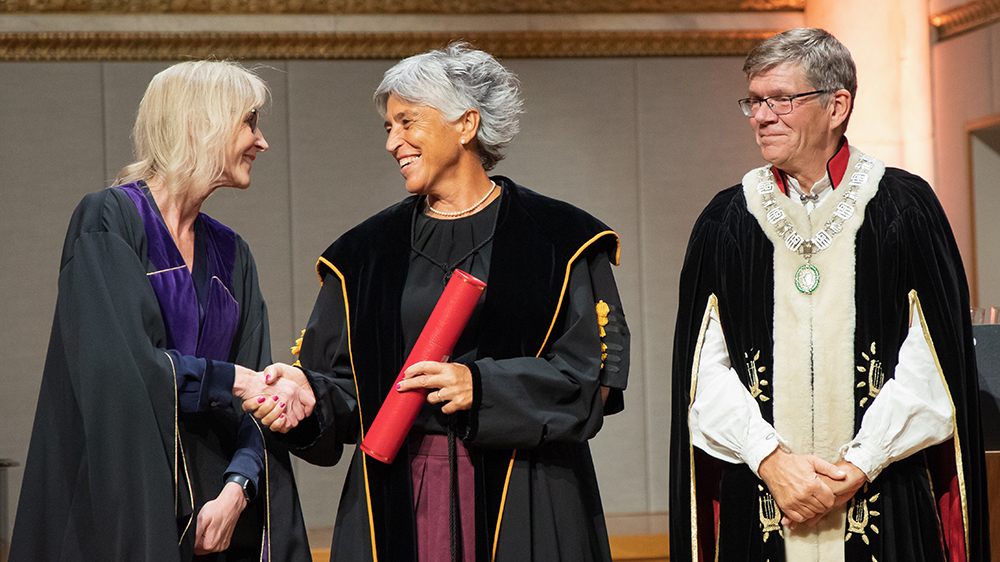 Catherine Cornille is described as a creative and fearless researcher who challenges generally accepted truths in the field of religion. Cornille also emphasizes the importance of including women’s perspectives in religious dialogue and theology of religions.

‘I mainly focus on questions of religious plurality from a theological and a phenomenological perspective. I try to respond to the challenges that religious diversity poses from within religious self-understanding. Though I mainly use examples from the Christian tradition, my reflections generally apply to other religions as well,’ Cornille says.

A leading researcher in an increasingly important field

Dean Aud V. Tønnessen praises the new honorary doctorate for her contributions to the field.

‘Cornille is one of the leading researchers in a field that has become increasingly important. In today's globalized world, theology and religion can trigger conflicts, but also play a constructive role in establishing mutual understanding and cooperation,’ says Tønnessen.

‘In her research, she shows how exactly religion can contribute locally and globally to increased understanding and cooperation between people and cultures. Not least, her emphasis on women's perspectives in religious theology and dialogue is very significant,’ Tønnessen continues.

Humbled and honored by receiving the honorary doctorate degree

Cornille received her honorary doctorate degree at the University of Oslo’s annual celebration on September 2.

I am extremely humbled and honored by this award,’ Cornille says.

‘I see it as a recognition not only of my own work, but also of the importance of serious reflection on the challenges of religious plurality for theological reflection,’ she adds.

Cornille is now eager to continue the collaboration with her Norwegian colleagues.

‘I find colleagues at the Faculty of Theology to be a good sounding board for some of my ideas. They approach similar questions from within a very different context, and I believe that we challenge one another to advance theological reflection on questions of interreligious theology and comparative theology.’

Dean Aud V. Tønnessen is also certain that having Cornille on the team as an honorary doctor is important for the faculty.

‘Cornille can contribute directly to the faculty's work with multi-religious theological education, a major task that will characterize the entire faculty's work in the years to come. Cornille has a large network and will add important expertise also in the faculty's work on Islamic theology and the education of religious leaders,’ states Tønnessen.

Catherine Cornille (b. 1961) is a professor of comparative theology at Boston College. She became the first female full professor of theology in Boston in 2012.

Cornille received her education from KU Leuven and the University of Hawaii, and she has been associated with a number of leading European, Asian and American universities.

With significant books such as The Im/Possibility of Interreligious Dialogue (2008) Cornille has given outstanding contributions to methodology and theoretical analysis of particular challenges in comparative theology, even politically, culturally, and philosophically.

Cornille has focused in particular on the relationship between Asian religions and Christianity, including studies of Hinduism, Buddhism and Islam from an interreligious perspective.

Her most recent work, Meaning and Method in Comparative Theology was an attempt to discuss some fundamental questions about how to do comparative theology, and what might be gained from it. Cornille also recently edited a volume Atonement and Comparative Theology in which Christian theologians reflect on what they have learned from their engagement with other religions on the question of the redemptive suffering of Jesus.

Currently Cornille is trying to develop a new understanding of religious particularity beyond the a priori claims of religious traditions, as well as the tendency to reduce all religions to the same.