This February, four new PhD fellows arrived at the faculty. With projects spanning from Chaplaincy and the ethics of organ donation to Liturgical Psalters and 15th century pneumatology, these four new faculty members will contribute to the diverse and interdisciplinary profile of the Faculty of Theology. 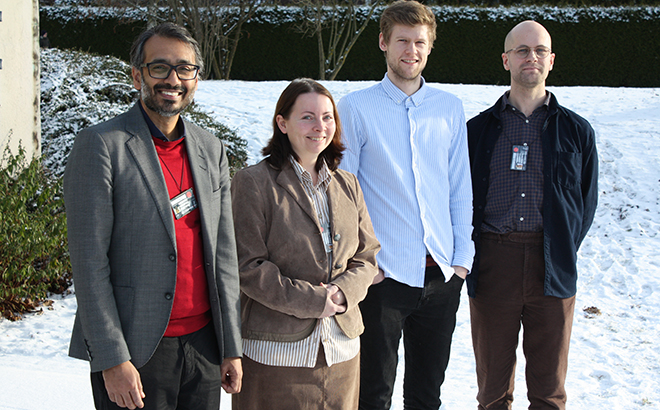 Naveed Baig was born and raised in Denmark. He has a master in pastoral care from University of Copenhagen, as well as being trained as a Muslim chaplain in Leicester, UK.

Baig is not a stranger to the Faculty of Theology in Oslo, he has been working partime as a lecturer since 2018 on the new LES program (Leadership, Ethics and Dialogue) with focus on Islamic care. His field as a lecturer is also his field as a researcher.

From practice to research

“My PhD will try to explore Muslim patient’s spiritual and religious thoughts - if any - during times of crisis at Nordic hospital settings. It will be an empirical study where I will interview patients from Norway, Sweden and Denmark”, Baig says.

He worked as a Muslim hospital chaplain for about 15 years. Here he visited and counselled sick and dying patients.

“I have been a practitioner for many years and thought it would be beneficial to do some research in this field, which we don’t have much knowledge about in the Nordic countries”, Baig continues.

Psalters and daily worship in a syriac setting

Natalia Smelova graduated in Medieval and Early Modern Studies from St Petersburg State University with specialisation in Byzantine history. After this, she completed a postgraduate programme in Syriac Studies at the Insitute of Oriental Manuscripts of the Russian Academy of Sciences. She then went on to the University College London (UCL) and earned her Master's degree in Library and Information Studies there.

Her PhD project is entitiled "The Daily Worship in the Syriac Setting: Melkite Liturgical Psalters between Palestine and Central Asia”.

“I shall work on the phenomenon of the so-called Liturgical Psalter, a service book which combines Biblical texts as a core with non-Biblical liturgical appendix”, Smelova says, and continues:

“The recitation of psalms (psalmody) played a crucial role in the genesis and subsequent development of the continuous cycle of daily worship in the Late Antique and Medieval Christian communities, particularly in the Eastern Roman Empire (Byzantium) and the Middle East.”

She wants to explore how Psalter shaped the everyday worship in Syriac-speaking environment on the one hand,  and how worshippers adopted and adapted Psalter for their needs, on the other hand.

Her interest in liturgy and hymnology developed in the early 1990s.

“in this period, translated writings of the Church Fathers, including Ephrem the Syrian, and Byzantine hymnography gradually became avaiable to a wider audience in Russia as a sign of revival of the Christian spirituality”, Smelova explains.

Smelova tells us that the Faculty of Theology in Oslo is one of the few faculties in Europe which supports Liturgical Studies on the institutional level.

“I am thrilled about the opportunity to contribute to the work of the research group "Eastern Christian Daily Office”, which is unique of its kind”, she states.

For Emil Junge Busch, the path to his field of research was more of the unintended kind.

“I became interested in ethics by accident. When I started my studies, I signed up for psychology and philosophy, psychology being my main subject,” Busch tells us.

“At my university, it was a requirement that you had two subjects, and philosophy seemed as good as any other. I have always liked a good dispute, so when I had an obligatory course in ethical and political philosophy, combined with argumentation, I was sold,” he says.

Busch has a bachelor’s degree in philosophy and science in combination with history, and a master’s degree in philosophy and science in combination with communication. His PhD project is part of the research group “Availability and function of donor organs: Debating the dead donor rule”. This is one of the so-called convergence environments funded by the Interdisciplinary strategic research area Life Science at the University of Oslo. One of the principal investigators in this project is Professor Marius Timmann Mjaaland at the Faculty of Theology, who will be Busch’s supervisor.

Exploring the ethics of organ donations

“My PhD project will consist of ethical and philosophical reflections on a "new" method of organ donation called controlled Donation after Circulatory Death (cDCD)” Busch says.

The method was tested in Norway for a short period of time, but was ended due to a dispute between health professionals on when people where actually considered dead.

“The project will focus on the ethical issues concerning the practice of cDCD and how the use of cDCD could challenge the established ethical guideline for organ donation - the Dead Donor Rule. It will also consist of a reflection on how and if a new criteria of death could change our understanding of the limit between life and death”, Busch explains.

Cardinal Nicholas of Cusa on the Holy Spirit

Ekberg recently moved to Oslo with his wife and three children. The plan is to stay here for at least the duration of his PhD studies.

“My dissertation seeks to critically retrieve the thought of the 15th century philosopher, mystic, and cardinal Nicholas of Cusa, for a contribution to contemporary theological discussions concerning the Holy Spirit, an area of study conventionally called Pneumatology”, Ekberg explains.

“I will not only be looking at Cusanus’ tractates or dialogues, but also a selection of sermons, to bring forward the centrality of the Holy Spirit for his whole thinking about God and the world.”

He tells us that Cusanus has received increasing attention from theologians in the last half century, and especially so in the last decades. In Scandinavia today, philosophers are doing most of the academic work on Cusa, but Ekberg says there is a venerable tradition of theological Cusanus scholarship here in the last generations, which merits recognition.

“I now find myself grafted like a wild olive shoot into this Nordic branch, hoping to be nourished from the sap of the whole tree of Cusanus studies. Under the guidance of my colleagues at TF, this work might bring fruit, and perhaps some well-needed shade, to the full area of systematic theology”, he says.

Ekberg’s interest for theology and philosophy of religion grew out of a love for philosophy or “the big questions”, but he found that this wasn’t quite the concern of those tasked with teaching philosophy at his undergraduate institution.

“As a younger student of philosophy, eager to learn ways of speaking about the ultimate, the foundational questions of reality, I felt deeply unsatisfied with many of my professors’ exclusion of anything that smacked of the religious in the intellectual traditions of the west” Ekberg explains.

For Ekberg, systematic theology and philosophy of religion showed themselves to be “disciplines that make wide and informed use of philosophical concepts and methods to elucidate in rational terms the mystery that is existence itself, even when that mystery in many traditions is called ‘God’.”

We wish our new PhD fellows a heartily welcome to the faculty!