Shedding new light on Paul’s use of “sarx”

The first Christians were in a major transition towards a new identity. In a new EU funded project, Linda Joelsson will investigate how Paul uses the term “sarx” when their new, collective identity is established. 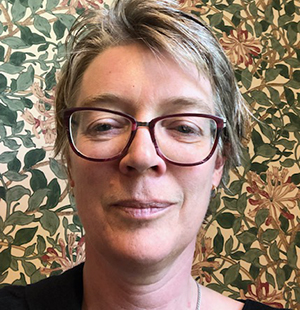 With the Faculty of Theology as coordinating institution and professor Marianne Bjelland Kartzow as project manager, Linda Joelsson received a Marie Curie grant for her project MaSarx and will join the Faculty as a postdoctoral fellow for the next two years.

Joelsson tells us that she is interested in democracy, in psychological coping, and in the notions and narratives that strengthen democracy and resilience in societies. Therefore, she tries to make sure that each research project she undertakes has a bearing on those issues.

”My doctoral thesis investigated Paul’s changing attitudes to death from the perspective of psychological coping. Indeed, his attitudes appear to transform from denial to reaction, and then to processing and finally to acceptance—a more or less typical coping process”, Joelsson explains.

She thinks it is fascinating to create a meeting between these ancient texts and modern discourses, such as psychological theory and social systems theory.

”From psychology, I moved to social systems theory, a theoretical perspective that I think will be used much more in the future. Briefly described, a high level of diversity makes a social system more resilient, but the path to diversity is often marked by emotional reactions, turmoil, and, sometimes, aggression. In Biblical studies, my latest article investigates exorcisms in the Gospel of Luke from the perspective of social systems theory”, she tells us.

Joelssons most recent position was at Umeå University, where she was teaching and supervising students in the New Testament. Before that, she was a lecturer at Ersta-Sköndal-Bräcke Högskola in Stockholm, where the  high competence in social sciences and health care also influences Biblical studies.

“There I was given the opportunity to launch new courses, such as the interdisciplinary “Religion and Health,” which was quite stimulating”, Joelsson says.

“My doctoral thesis was written at Åbo Akademi University, Finland. At that time, I was also working in psychiatric health care and, later, as the senior pastor in a congregation in the southern part of Stockholm.”

Joelsson became interested in her field of research through her supervisor for her doctoral thesis, Prof. Kari Syreeni. He introduced Joelsson to psychological hermeneutics as an important and growing field in New Testament studies.

”I had plans for linguistics, but I never regretted changing course at this point. However, in the coming project I will work with linguistic aspects in combination with psychological and sociological hermeneutics”, Joelsson tells us.

Joelsson says that she has longed to work with the topic for her MaSarx project for some time.

”Clearly, Paul’s discourses about the ’flesh’ are easily misunderstood, and at the best obscure”, Joelsson claims.

”As a graduate student, I intended to show that Paul’s anthropological perspective on the physical body did not promote psychological and social health”, Joelsson says and continues:

”Soon I found myself diving into translation matters of great magnitude. The Greek term sarx is often translated to ’flesh’ in Paul’s letters, but is equally often referring to people belonging to the same group, or to collective identity as such. In such cases, it can be translated into terms such as ’kin’, ’humans’, and so on. For instance, Paul emphasizes his loyalty to his kinsfolk by referring to them as his ’flesh’”, Joelsson explains.

Her aim is to investigate Paul’s use of sarx as seen from the perspective of social systems theory. Hopefully,  new options for translation of the passages where Paul uses the term sarx can also be suggested.

”My primary interest in translation is the Scandinavian languages, but it can of course be expanded. Therefore the secondment at the Norwegian Non-Fiction Writers and Translators Association (NFFO) is an opportunity to reach insights and skills in the practices and predicaments of translation in practice.”

Joelsson met Prof. Marianne Bjelland Kartzow in Berlin, who paid great interested to the ideas for her project.

”We decided to write an application for the Marie Sklodowska Curie Training Fellowship, and the second time we received the grant”, Joelsson tells us.

”I knew beforehand that the concentration of competence in the fields that I am most interested in is brilliant at the Theological Faculty of the UiO. My visit and contacts with the UiO has only strenghtened this impression, and the staff is very professional”, she says.

”Clearly this is an excellent site for my project, and I hope that the collaboration will be to our mutual benefit.”

“The research group Biblical Texts, Cultures and Receptions congratulates and welcomes Linda Joelsson and looks forward to have her as our colleague the two next years”, Bjelland Kartzow says.

She tells us that Joelsson is the first post.doc to receive a Marie Curie scholarship at the faculty, and hopes that Joelsson may give other researchers ideas on how to apply for this prestigious EU-funding.

“With her expertize on psychological approaches to biblical studies and her broad international network, she brings important competence to the research group and the faculty. Her project is interdisciplinary and innovative, and will fit nicely into the research portfolio of our group.”