Dr. Hans Magnus Barstad, professor of theology, was an outstanding researcher, a formidable supervisor, a nationally noted academic figure, and a good colleague and friend. His competence was widely recognized across the fields of biblical studies, theology, university library sciences, and in the wider realm of academia. We speak for many within the fields of theology and biblical studies when we say we remember Hans with gratitude and sorrow. 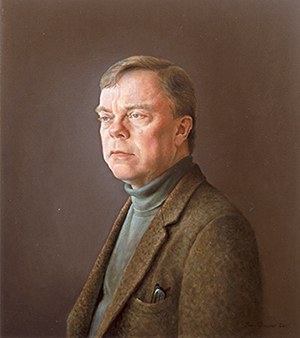 Hans was born in 1947, the son of a clergyman. Early in his life the family moved to the area around the Norwegian town of Hokksund, and this is where he felt at home. His father, Rev. Sverre Ingolf Barstad, was very interested in the archaeology and history of ancient Israel – an interest that transferred to young Hans, who went on to study at the Faculty of Theology, University of Oslo from 1967 to 1973.

During his studies Hans Barstad became interested in library theory and research, and later became a university librarian (in 1980), and then senior research librarian in 1981. In 1984 he became the senior librarian with special responsibility for the university’s collection of rare and old books – a responsibility mirroring his own passion for books and book collections.

In terms of research, Hans Barstad took up the religio-historical orientation forged by his predecessors at the Faculty of Theology, Sigmund Mowinckel and Arvid S. Kapelrud. Through his broad and extensive grasp of this field of research, and with his never-failing academic discernment, he developed a distinctive version of this approach. As a fellow of the Research Council of Norway in 1976 and 1978–79, Hans M. Barstad spent time in Oxford studying with Professor James Barr. This engraved in him his interest for the study of ancient Near Eastern languages and texts, and also a soberly critical approach to historical reasoning.

He earned his degree of dr. theol. at the University of Oslo in 1982 with the thesis Studies in the Religious Polemics in the Book of Amos. The thesis was later published as The Religious Polemics of Amos in the Supplements to Vetus Testamentum (1984). He served as Professor of Old Testament studies at the Faculty of Theology in Oslo from 1986 to 2005, after which he was called to the chair of Hebrew and Old Testament studies in the School of Divinity, Edinburgh University. Barstad became a professor emeritus in 2013, and later moved to Spain, where he died in August 2020.

As a professor at the University of Oslo he undertook many duties,including chairing the Board of Oslo University Library 1988–92, Secretary General of The Norwegian Academy for Science and Letters 1998–2000, Dean of Research for the Faculty of Theology 2003–2005, and member of the board awarding the annual Ludvig Holdberg Memorial Prize (2003–2007). He was one of the founding members of the Norwegian Old Testament Society, which pursued his aim of establishing successful national cooperation in the field of Hebrew Bible studies. He chaired the board of this society from 1992–94.

All this notwithstanding, it was as a researcher in the field of ancient Hebrew literature and Near Eastern history and religion that he left his most impressive footprints. He was often invited as a keynote speaker to the largest and most important congresses and conferences in his field. He published a number of very influential articles, served on the editorial boards of several important international journals, and authored and co-edited books printed by leading publishers in the field.

There were two main areas in his research. First, there was prophecy and prophetic literature. Hans was widely engaged in this research, himself mainly focusing on the Book of Amos and on Isaiah 40–55. Secondly, he was primarily concerned in historiography, and in writing the history of the ancient Near East, in particular the history of the Southern Levant. He mainly involved himself with the period often called “the age of exile” (the period of transition from the Late Babylonian to the Early Persian period). His publications in both these fields had wide influence, not least the volume on The Myth of the Empty Land. Through his innate ability to develop new approaches and arrive at non-traditional results he stimulated novel agendas in international research.

In 2004 he was awarded the Nansen Prize for outstanding research. The commendation of the jury stated: “Hans Barstad is a researcher that has managed to renew his fields of study by challenging commonly accepted truth, by placing texts of the Hebrew Bible firmly in a religio-historical and ancient Near Eastern context, and by integrating historical, archaeological, and literary studies. This approach characterized all his academic writings.”

With his death Norwegian theology and biblical studies have lost a colourful, dedicated and sharp researcher, an ambitious academic who always entered into dialogue with the best research, a supervisor who was at once strict and generous, a colleague who could flag his own, often provocative, views but still work with cooperation and understanding across competing academic institutions and traditions.

Hans Magnus has gone, but a warm respect and deep gratitude for the life he shared with his colleagues will long remain. May he rest in peace.